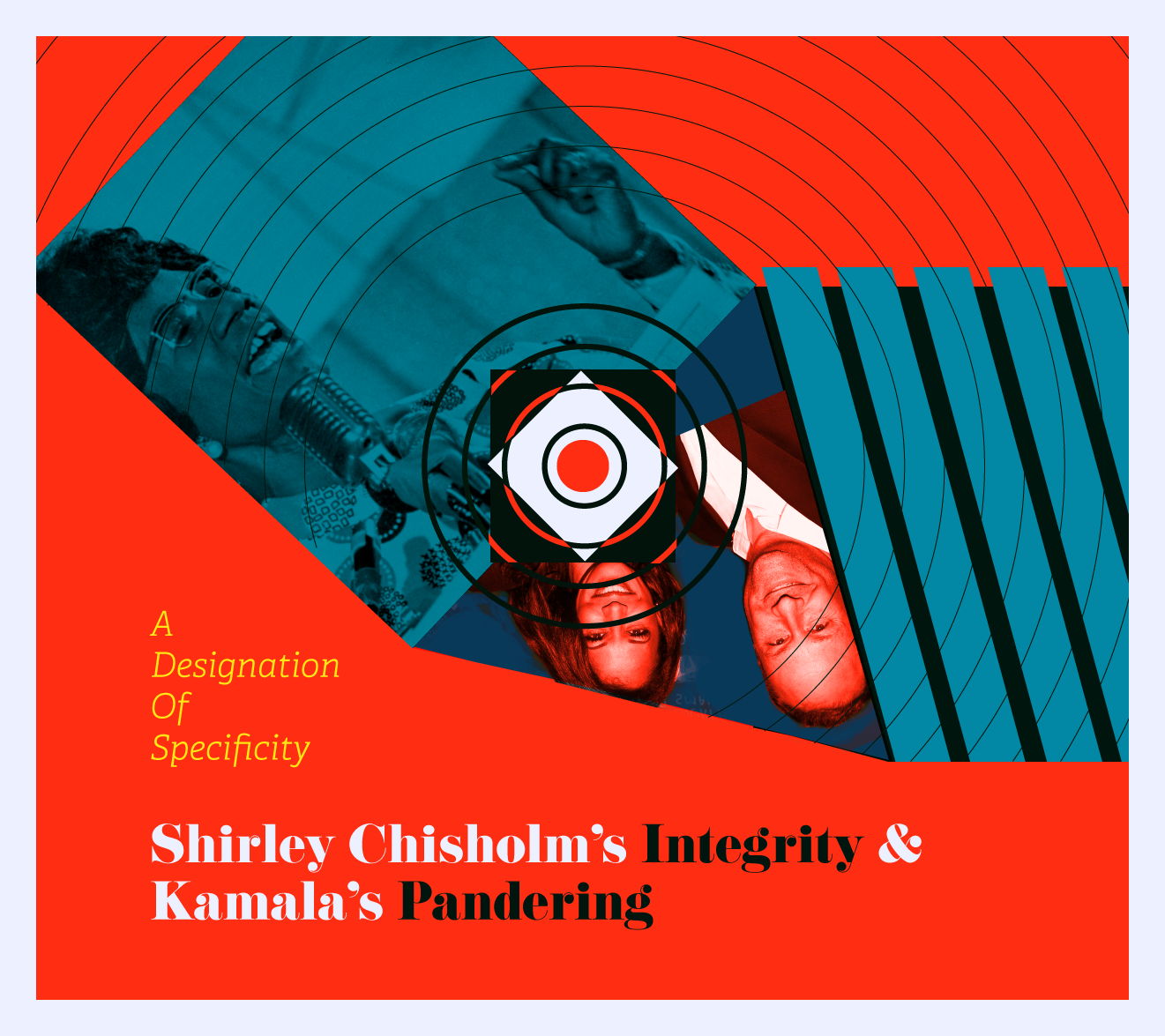 Shirley Chisholm’s name has been bandied about lately. Former Conservative Prosecutor, excuse me, former San Francisco district attorney(2004-2011), Kamala Harris, may bear some responsibility for that. However, this slight resurrection of Mrs. “Unbought And Unbossed” Shirley should not in any way be regarded in a similar vein as say Alice Walker’s conjuring of Ms. Zora.

Ms. Chisholm’s reemergence into public mind space has caused me to revisit her own words and achievements. In her autobiographical work, “Unbought & Unbossed”, she writes about ancestry and constituency during her run to become representative of New York’s 12th congressional district.

Less important than the sex issue was another undercurrent that ran against me. An inescapable fact, but one I have never liked to discuss because of the senseless bad feeling it can cause, is that a surprising number of the successful black politicians of our time are of West Indian descent. Thomas Jones, Ruth Goring, William Thompson, and I were all of Barbadian descent. State Senator Walter Stewart of Brooklyn is a Panamanian. So are many prominent blacks elsewhere in politics and the arts. In Brooklyn I have heard people grumbling for years, “They’re taking over everything.” Other black people will say, “Why don’t those monkeys get back on a banana boat?” There is a strong undercurrent of resentment, at least in New York, where most of the islanders migrated. It has never come out in the open against me, but sometimes I can sense it.

It is wrong, because the accident that my ancestors were brought as slaves to the islands while black mainland natives’ancestors were brought as slaves to the States is really not important, compared to the common heritage of black brotherhood and unity in the face of oppression that we have.But the feeling is there. One basis for it may be that in the islands, slavery was a less destructive experience than it was in the States. Families were not broken up as they were in the South. The abolition of slavery came earlier there, and with much less trouble. In the islands, there have never been the same kind of race barriers. There are class barriers, but they are not the same; race lines cut across them. As a result, I think blacks from the islands tend to have less fear of white people, and therefore less hatred of them.

They can meet whites as equals; this is harder for American blacks, who tend to overreact by jumping from feeling that whites are superior to looking down on them as inferior. Both attitudes equally isolate them from the greater society in which eventually we all have to learn to live.

Mrs. Shirley reminds us here that there are some specific differences between Blacks who are descendants of slavery in what is now referred to as the United States of America and those descended from slaves of other areas of these Americas. Her words, “I have never liked to discuss because of the senseless bad feeling it can cause”, points to a magnitude of courage and integrity not found in Kamala Harris’s Bardi B head nods, myths of marijuana clouds with Tupac and Snoop as soundtrack, or photo ops with hot sauce and soul food.

Another important sentiment addressed in quote is Mrs. Shirley’s assessment of why US Blacks feel a need to address of immigrant Blacks as a detriment to Our own achievements. Before I delve into that, it must be noted that Mrs. Shirley is a real one in my judgment. She is of that stock of Blacks that organized in housing projects before Jay-Z made it cool for people like Oprah to come through a Brooklyn housing project. This is not a discussion of Mrs. Shirley’s importance or character. I am having this conversation here — an extension of my thoughts I label, Black Media Trust– with her because she reminds us of how important it is to have a designation of specificity.

Her assessment, her analysis, of why US Black descendants of slaves feel a need to frame Black immigrants in a threatening way is biased. As it should be. As I would expect it to be. As I would not want it to be any other way coming from mind of such a strong and proud person. Mrs. Shirley is supposed to see this discussion from her perspective and stand as a representative of immigrant voice. Just as it is my role to represent a voice of those on that opposing side.

Given that understanding, what is Mrs. Shirley missing in her presentation of this dynamic? What would a Black person whose ancestry is so entrenched here in these states and its history of dividing families that they simply cannot name a specific family member that was not born in the United States about of descendants of US slavery and immigrants? Is the only of people offering harmful and insulting words Blacks with US Slave heritage? Or is it possible that this dynamic is also represented by a disdain of US Black(descendants of US Slavery) by Black immigrants and those Blacks born here but not descendants of those mighty people that survived US Slavery in these states?

We are dealing with how Ms. Shirley presents this discussion. She suggests that this dynamic only exists as a US Black(Descendants of US Slavery) interpretation of immigrant success. It does not consider culture of Black immigrants embracing Whyte propaganda and ideological statements vis a vis US Black(Descendants of US Slavery). It does not consider this culture of Black immigrants harboring stereotypes about US Blacks(Descendants of US Slavery) as lazy, unambitious, anti-intellectual, and unwilling to engage resistance. Even her analysis bears this when she intimates, “I think blacks from the islands tend to have less fear of white people, and therefore less hatred of them…They can meet whites as equals; this is harder for American blacks, who tend to overreact by jumping from feeling that whites are superior to looking down on them as inferior.”

Her conclusion is not that power brokers have extended the same economic and social stratification initiated in US Slavery prior to the United States becoming “United States”. Her conclusion is that due to inferiority complexes, US Blacks(Descendants of US Slavery) are isolating themselves “from the greater society in which eventually we all have to learn to live.”

In conclusion, as I have written elsewhere, Black Media Trust has as a component a need to recognize when racial fictive obligations are being abused. It is my belief that comparing Kamala Harris to Shirley Chisholm is a form of this abuse. Further, Shirley Chisholm’s approach to distinctions of specificity represent her integrity and courage in stark contrast to Harris’s superficial pandering without addressing those distinctions of specificity although they exist.