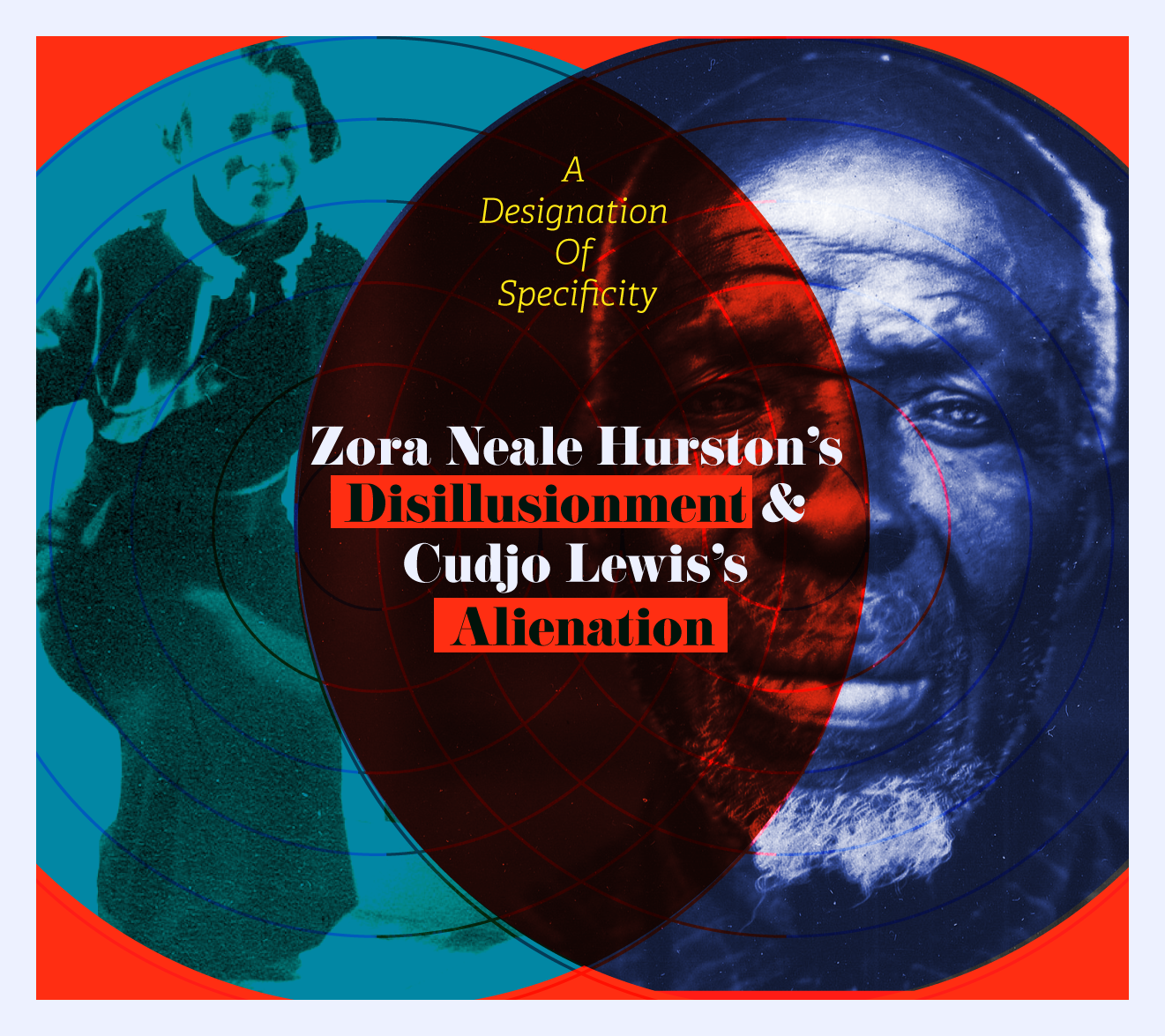 I want to show that there is a body of literature– a tradition if you will– outlining a need for a designation of specificity between US Blacks born into slavery or descendants thereof and their native Afrikan counterparts. My impetus derives mainly from reading through a number of online discussions implying that this body of work does not exist.

In an essay I wrote recently, we reviewed one time US Presidential candidate, Ms. Shirley Chisholm’s thoughts on this discussion.   In this work, I would like to take a look at Ms. Zora Neale Hurston’s words in relation to this topic at hand.

In Ms. Zora Neale Hurston’s 1942 autobiographical sketch, “Dust Tracks On A Road”, she details her anthropological work for Carter G. Woodson and Columbia University. I quote her at length here for sake of accessibility and context.

In her own words:

One bit of research I did jointly for the Journal of Negro History and Columbia University, was in Mobile, Alabama. There I went to talk to Cudjo Lewis. That is the American version of his name. His African name was Kossola-O-Lo-Loo-Ay.

He arrived on the last load of slaves run into the United States and was the only Negro alive that came over on a slave ship. It happened in 1859 just when the fight between the South and the Abolitionists was moving toward the Civil War. He has died since I saw him.

I found him a cheerful, poetical old gentleman in his late nineties, who could tell a good story. His interpretation of the story of Jonah is marvelous.


He was a good Christian and so he pretended to have forgotten all of his African religion. He turned me off with the statement that his Nigerian religion was the same as Christianity. “We know it a God, you unner’stand, but we don’t know He got a Son.”

He told me in detail of the circumstances in Africa that brought about his slavery here. How the powerful Kingdom of Dahomey, finding the slave trade so profitable, had abandoned farming, hunting and all else to capture slaves to stock the barracoons on the beach at Dmydah to sell to the slavers who came from across the ocean. How quarrels were manufactured by the King of Dahomey with more peaceful agricultural nations in striking distance of Dahomey in Nigeria and Gold Coast; how they were assaulted, completely wiped off the map, their names never to appear again, except when they were named in boastful chant before the King at one of his “customs” when his glory was being sung. The able-bodied who were captured were marched to Abomey, the capital city of Dahomey and displayed to the King, then put into the barracoons to await a buyer. The too old, the too young, the injured in battle were instantly beheaded and their heads smoked and carried back to the King. He paid off on heads, dead or alive. The skulls of the slaughtered were not wasted either. The King had his famous Palace of Skulls. The Palace grounds had a massive gate of skull-heads. The wall surrounding the grounds were built of skulls. You see, the Kings of Dahomey were truly great and mighty and a lot of skulls were bound to come out of their ambitions. While it looked awesome and splendid to him and his warriors, the sight must have been most grewsome and crude to western eyes. Imagine a Palace of Hindu or Zulu skulls in London! Or Javanese skulls in The Hague!

One thing impressed me strongly from this three months of association with Cudjo Lewis. The white people had held my people in slavery here in America. They had bought us, it is true and exploited us. But the inescapable fact that stuck in my craw, was: my people had sold me and the white people had bought me. That did away with the folklore I had been brought up on—that the white people had gone to Africa, waved a red handkerchief at the Africans and lured them aboard ship and sailed away. I know that civilized money stirred up African greed. That wars between tribes were often stirred up by white traders to provide more slaves in the barracoons and all that. But, if the African princes had been as pure and as innocent as I would like to think, it could not have happened. No, my own people had butchered and killed, exterminated whole nations and torn families apart, for a profit before the strangers got their chance at a cut. It was a sobering thought. What is more, all that this Cudjo told me was verified from other historical sources. It impressed upon me the universal nature of greed and glory. Lack of power and opportunity passes off too often for virtue. If I were King, let us say, over the Western Hemisphere tomorrow, instead of who I am, what would I consider right and just? Would I put the cloak of Justice on my ambition and send her out a-whoring after conquests? It is something to ponder over with fear.

Before her anthropological work inspired Alice Walker, Ms. Zora sat and talked with Kossola about Dahomey’s fierce warrior women that cut off heads of innocent African people while escorting others to barracoons. A record of those discussions has been published. Before we delve into that record, entitled, ‘Barracoon: The Story of the Last “Black Cargo”‘, I would like to analyze Ms. Zora’s above writing for our purposes here.

As stated in my opening sentence, our purpose here is to show historical literature pointing at a need for a designation of specificity vis a vis US Blacks born in the United States to descendants of US Slaves and those Blacks of other ancestral trajectories.

Her words are clear. Prior to her interviewing Cudjo– like many US Blacks– Ms. Zora Neale Hurston admits to believing only Whyte people were involved in and torturing Black slaves. She did not know of those Afrikans guilty of atrocities such as beheading less militarized leaders and elderly Blacks, making of their skulls an exchange currency. Her disillusionment articulated here embodies a need for vocabulary that situates one group of Blacks from another group Blacks. There is a need for a designation of specificity.

Before moving on to Mr. Cudjo’s own words, let us examine Ms. Zora’s statements within the framework of Black Media Trust. Let’s refresh our memory regarding Black Media Trust as it applies here.


One danger of using race as a major qualifier of heritage is that race does not imply or even suggest descent. Descent is actual humans that I descend from. My racial heritage in many ways is a fictional device. By fictional, I do not mean fanciful, or fantastic, I simply mean an invention or adoption that is not necessarily an objective or measurable reality. My adoption of Malcolm X as racial predecessor whom I have received an extended racial heritage from is predominantly fictional.

is not a biological agreement. It is not found in my blood, and what it has of existence in my skin is still bound to perceptions necessary to consecrate racialized social orders.

As illustrated above, Black Media Trust brings into question aspects of fictive kinship obligations. Typically, I reserve this to mediated space, but I beg you to allow me an extension into folklore. Ms. Zora states, ” …my people had sold me and the white people had bought me. That did away with the folklore I had been brought up on—that the white people had gone to Africa, waved a red handkerchief at the Africans and lured them aboard ship and sailed away. “

This statement exposes a few presumptions that many of us even in our contemporary moment make. Ms. Zora uses a collective possessive first person “we” when referring to Afrikans of varied descent. It is quite possible she has absolutely no relation to any of those people. Her blind association figures heavily in her disillusionment. Since she believes she is kin to every Afrikan that ever walked, she experiences shock when realizing humans have exercised hostile conquering tactics in every time zone on Earth.

Even amongst captive slaves in a foreign land, racialized fictive kinship demands a designation of specificity. Thus far we have quoted Ms. Zora’s autobiographical work. In order to explore Mr. Cudjo’s thoughts regarding racial distinctions, we will need to visit Ms. Zora’s anthropological work contained in 2018’s release of Barracoon: The Story of the Last “Black Cargo”.

Chapter seven of this work is entitled, “Slavery”. Throughout Barracoon, Zora narrates her visits to Cudjo at his home as an introduction, while subsequent monologue from Mr. Cudjo forms its quoted body. In this monologue, Kossola discusses his life as a slave and his days after emancipation.

A survivor of one of USA’s last slave ships is documented as saying:

“When we at de plantation on Sunday we so glad we ain’ no work to do. So we dance in de Afficky soil. De American colored folks, you me, dey we savage and den dey laugh at us and say nothin’ to us. But Free George, you me, he a colored man belong to nobody. His wife, you me, she been long time. So she for a Creole man and George ’cause she marry wid him. Free George, he to us and tell us not to dance on Sunday. Den he tell us Sunday is. We know it is before. Nobody in Afficky soil us ’bout no Sunday. Den we dance no mo’ on de Sunday.”

I was left slightly teary-eyed knowing Mr. Cudjo and his Afrikan coterie stopped dancing due to US Blacks having their religious sensibilities offended. It immediately points to my overall sentiment regarding a need for a designation of specificity. Here we read Mr. Kossula referring to those kidnapped from Afrika in implied subtext (“So we dance in de Afficky soil”). However, he represents US Blacks specifically with “De American colored folks”, and “Free” as a title.

While these are not designations that I would ever be willing to answer to, they are reflective of Mr. Cudjo’s era and ideological realities. What is most salient here is that Mr. Cudjo makes a distinction between US Blacks born on US soil(“De American colored folks”) and those born in Afrika arriving most recently. This distinction comes with apparent rules and codes that not only but seemingly present opposition, contention. In this way, Mr. Cudjo’s presentation of distinctions reminds me of Mrs. Shirley Chisholm’s presentation.

To wrap up, this essay has aided in showing that there is a body of literature– a tradition if you will– outlining a need for a designation of specificity between US Blacks born into slavery or descendants thereof and their native Afrikan counterparts. It also works to dispel myths that a need for a designation of specificity only cropped up in century. This line of thinking, shown in Zora Neale Hurston’s autobiography as well as her academic work vetted by Mr. Negro History himself, Mr. Carter G. Woodson, which quotes one of kidnapped victims from Afrika. We have also reinforced an understanding of flaws and dangers embedded in racialized fictive kinship obligations as I have framed it countless times in my discussions of Black Media Trust.