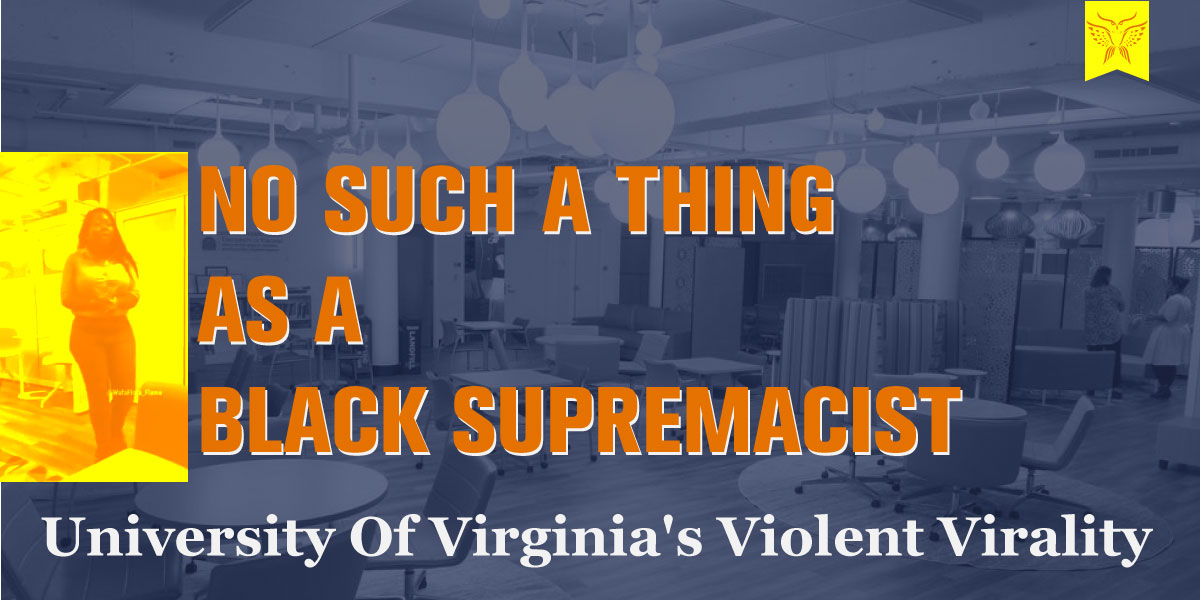 Back in February of 2020(I am writing this in May of same year), I posted this on TikTok:

As well as this video:

My reasons for uploading that first video was inspired by a Twitter update. That second video was uploaded as a response to those responding to said first video. This Twitter update from conservative(*cough* racist *ahem*) propaganda outfit, Young America’s Foundation, was my initial inspiration:

Back in February, I thought my two updates on TikTok would be sufficient. Apparently, not. As I stated in my response video, this young woman is not enforcing “segregation”. This is not an example of “reverse racism”. There is no such a thing as “reverse racism”. To fully understand my reasoning here, context is an absolute must.

When I first read this, I thought it odd that this young sister was not addressed directly. Often, in cases of such controversy, those involved are placed blanketly on front street for all to place blame on. But, University of Virginia decided to indirectly take this to their administrative chins.

And unlike my racially bigoted friends over at YAF, I actually wondered why in a way that inspired research.

An article written by Nik Popli in University of Virginia’s student-run Cavalier Daily served my cravings for context. In that piece, they state,

Prior to becoming the MSC, the Center for Cultural Fluency originated in 2004 in the wake of a racially-motivated assault of former Student Council candidate Daisy Lundy, a Korean and African American student who was forcefully slammed into the wheel of her car by a man who also made a racial slur about her candidacy.  The MSC officially opened in October 2016 as a “student-centered, collaborative space that supports underrepresented and marginalized communities, while cultivating the holistic empowerment of all students.”

The center was originally located in the Newcomb basement with a maximum capacity of 49 people, prompting students to advocate for a larger and more visible space. The University’s decision to relocate the MSC to the second floor of Newcomb was initiated in June 2019 as part of the 10-year strategic plan project, which aims to focus on student diversity development. According to the most recent diversity data from 2018, 32.5 percent of U.Va. students are people of color, while 56.8 percent are white.

What is important to note here from this quote I have pulled is that there is a history of violence on this campus. Stemming from an incident in 2004, three years after Twin Towers were attacked on September 11, 2001. What those of us who do not live on that university’s quad must understand is how intense racial tension must be. I would implore YOU to imagine what sort of culture grows out of such pain and fear.

It would behoove us all to assess damages done prior to judging one vocalization captured and rendered viral by racists. It was not segregation, it was a reminder.