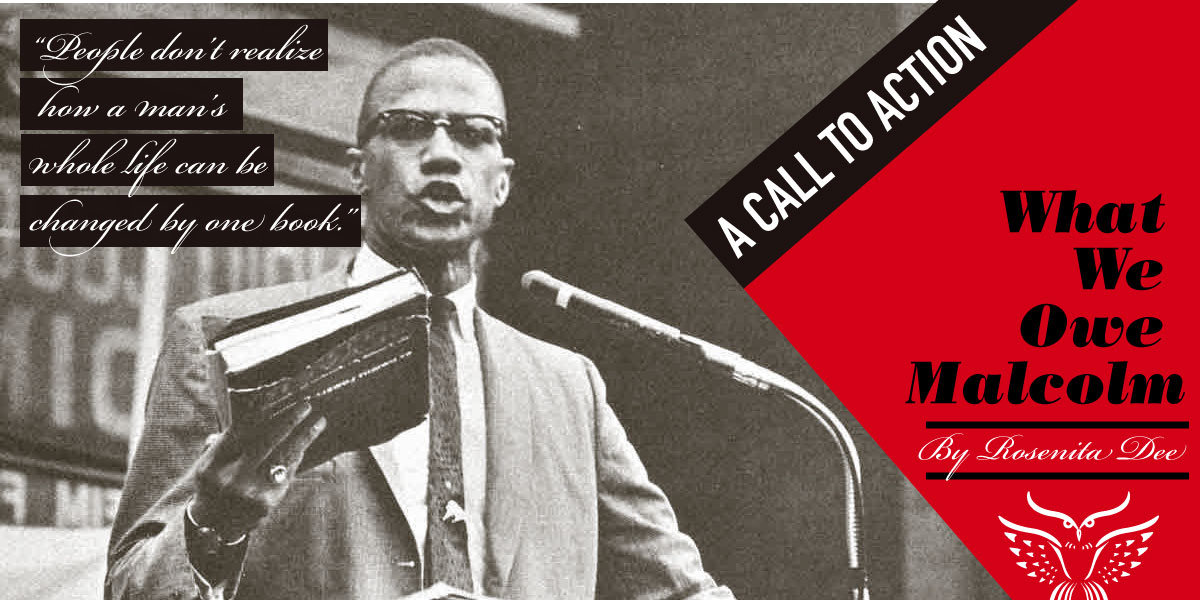 “People don’t realize how a man’s whole life can be changed by one book.”

I was first introduced to Malcolm X during my junior year of high school. I was the only upperclassman in an Earth Science class assigned to freshmen. The teacher taught us everything but science and I am forever grateful for that. I looked forward to going to 5th period every day. Mr. Edmonds transformed his classroom into a lecture hall. It was in his class that I first heard the name “Malcolm X”, it belonged to a man who did not have a face, let alone a voice in my changing world. The next week, I walked back into his class with Manning Marable’s Malcolm X: A Reinvention of Life and asked him why the N.O.I. chose “X” as their last names. I never finished Marable’s book because I soon learned that I was reading out of order.

After spending the entire school year learning about everything in Black history, I was ushered into an entire new world of “wokeness”, of course, this was before being woke was even a thing. Being in that class, something awoke in me that was dormant. Something that I didn’t know was inside of me, something that hasn’t been allowed to rest since. On the last day of school, Mr. Edmonds implored us to read The Autobiography of Malcolm X for summer break; 99% of the class ignored him. The summer of 2013, I finally read The Autobiography of Malcolm X for the first time. The entire time I was reading his autobiography, I felt his presence there with me. I heard his voice guiding me through his book and his voice has remained with me for the last six years.

My entire world changed. Everything that I once thought was right, was essentially altered after my first reading of The Autobiography of Malcolm X. I turned my back on organized religion, which was extremely radical due to my Catholic upbringing. I began to finally be aware of White supremacy and oppression in my everyday life. I realized how deeply white supremacy and oppression played a huge role in keeping me (and countless others) ignorant on just about everything.

In January of 2014, I read The Autobiography of Malcolm X for the second time. It was then that I decided to do something that many considered to be a daunting task; I decided that I wanted to petition the White House to establish a federal holiday in honor of Malcolm X. Erica (@rickiryan on Instagram), SankofaBrown (Twitter handle), praxis (Twitter handle), and myself were the core members of this collective. We decided that the focus of the Malcolm X holiday would be self-education through reading/literacy and creating reading materials accessible to everyone, even the most marginalized community. We decided that this would be the focus because of Malcolm’s messages urging Black people to read, educate, and empower themselves and their communities through reading. Though we were never able to reach the necessary 10,000 signatures, we all, in our own ways decided to amplify Malcolm’s message and creating spaces to share and make reading/literacy a known presence in our personal lives and communities.

Malcolm’s autobiography is one of the most unique and authentically raw autobiographical works that I have been blessed to read (my other favorites include A Taste of Power by Elaine Brown, Angela Davis: An Autobiography, and Assata) for a few reasons. For me, the biggest reason why Malcolm’s autobiography had such an impactful effect on me is because how powerful Malcolm’s words were. His voice, personality, and spirit lift off of the page. Reading through his book feels as though you are sitting in and listening to a conversation between Malcolm and Alex Haley, reading Malcolm’s autobiography is an intimate experience. Malcolm makes it very clear that this is his story, told in his own unique way and he is very open and candid about himself and his life story.

Malcolm starts his journey of his life by having us start in Lansing, Michigan. He thoroughly describes his childhood and his introduction to Pan-Africanism, with the help of his parents and Marcus Garvey. Malcolm then takes to Boston, where he transforms from a country bumpkin to a true, smooth talking city boy. From Boston, we follow Malcolm to Harlem and it is here, where he transforms into a hustler. And from Harlem, we follow Malcolm back to Boston and eventually to prison for eight years. It is here where we begin to see Malcolm Little begin to take form into Malcolm X. While in prison, Malcolm began to read, “I read aimlessly, until I learned to read selectively, with a purpose.” (161). It was also around this time that Malcolm’s brother Reginald, introduced him to Islam, Elijah Muhammed and the rest is history.

I recently decided to reread The Autobiography of Malcolm X for the sixth time and this reading gave me a lot to think and reflect about. The entire autobiography revolved around two major things: reading/education and change. While in prison, Malcolm found books and those books — along with the religion of Islam — saved him. “Anyone who has read a great deal can imagine the new world that opened.” (176). Malcolm stressed how important it was to educate oneself and to constantly read. Malcolm knew and believed that education was the key to liberating the minds of the Black community and the tool that would dismantle white supremacy and oppression. Malcolm believed that someone who belonged to the most marginalized community would be able to undergo the most radical transformation if the individual was given the chance and the materials.

As I mentioned earlier, even though the Malcolm X holiday initiative never got the necessary signatures to petition the white House, the core members of the collective have all done something to promote reading and self-education in our own communities, most notably Erica. Two years after the petition, Erica started her own initiative called Liberation Through Reading. LTR is a community based initiative that has gifted over 1000 books to Black children, books that are bought by supporters all over the country and books that center around Black children. Erica also hosts a weekly book club where members read and discuss Leftist theory and texts. All of this was born because of Malcolm.

Every time I have read The Autobiography of Malcolm X, I have been able to find something new that I missed the previous time. In the final paragraphs of the epilogue, Alex Haley describes Malcolm’s funeral and how his assassination rocked the nation and the world. The final sentence reads: “It still feels to me as if he (Malcolm X) has just gone into some next chapter, to be written by historians.” (463). This is what we owe to Malcolm, to continue writing his story, his mission, his ideas into this chapter of history and for years to come, but the only way we will ever be able to complete this book is if we begin to fight against illiteracy and a lack of reading in our communities. We must begin to make all literature accessible to ALL communities and people. Whether you are reading The Autobiography of Malcolm X for the first time or for the sixth time, like myself, I hope that Malcolm’s voice and words guide you and move you as they have for me. I hope that you decide to take up Malcolm’s call of action to continue his story and fight against your personal stagnant education and uplift your community. We owe it to Malcolm.