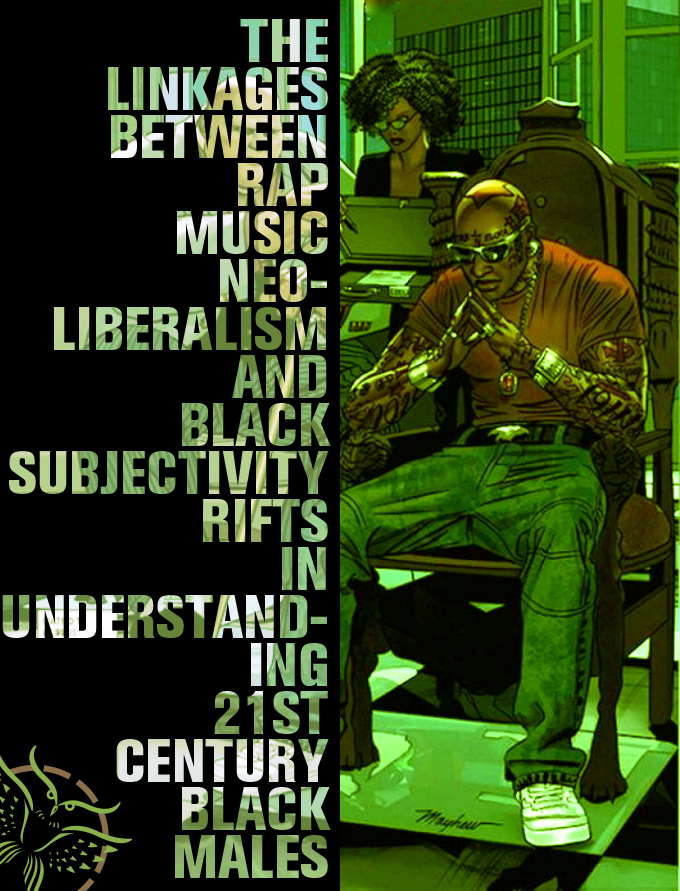 ” … public attention is more easily drawn to acts, images, and threats of black male violence than any other form of racial address.”

“Just as artists must be suppressed for fear of their influence over colonized populations, so too must journalism contend with the same repression.”

I picked the quotes above for precise reasonings.

In Tricia Rose’s Black Noise, she argues that Hip Hop is a platform that brings about the social change that “is committed culturally and emotionally to the pulses, pleasures, and problems of black urban life in the face of … diverse constituencies.” (Cf. Black Noise, Tricia Rose, Page 4)

Lester Spence’s Knocking The Hustle as well as his earlier work, Stare In The Darkness, pushes against Dr. Rose’s Black Noise wherein both he holds the position that Hip Hop has politics and political aptness to many degrees, but it can “lead a person to believe that he has more political efficacy” for simple being a rap consumer, in which he tests using finding from The 1993 Black Politics Study and 2003 St. Louis Young Citizen Study. (Cf. SITD – Page 77)

Within Dr. Jared A. Ball’s I Mix What I Like: A Mixtape Manifesto, he gives readers a deeply Pan Afrikan-centered analysis of Hip Hop as it combats subjectivity due to being made by constituencies of Black folks undergoing “Internal Colonialism” in America, in which he theorizes to a T. (Cf. IMWIL – Page 14)

All the quotes from the books cited above discuss Hip Hop (to some degree) and it’s communicative apparatus know as rap music in ways I appreciate and ways I cannot fully support. What they all do well is situate Black maleness into a space of subjection which is rightful the institutional-material atmosphere many of us reside in. They each address Black male MC’s egalitarian role that they play in relation to their respective communities and clans, but to varying degrees. What is missing from one of these texts is often visible in others. For example where Ball gives space to theorization of Hip Hop and its audiences and influencers through a theme focusing on exploitation in a colonial fashion, Rose forces us to consider the reality through her vantage point of the sociopolitical scene encasing Hip Hop, which is appreciated because she is one of the first female cultural critic to map out why Rap music is like it is today. Spence does something similar to Rose albeit mainly to establish Hip Hop as an arbiter of neoliberal governmentality and politics using tests, surveys, and data.

Although all three texts discuss neoliberal logic’s internal and external effect on Black populations, they don’t call explicitly call it “racial neoliberalism” or consider Black males to be neoliberalized Post-humans (Adams Burten, 2017). Though they all understand the vulnerability of Black people generally, only Dr. Spence and Dr. Rose make arguments about Black males as if they occupy an exceptional space where they can control they destiny through tactics of neoliberalism—entrepreneurial thinking, claiming and showing expertise, and uplift logic that has no real understanding of the material realities influencing its sway. Dr. Ball actually talks about Black males in his book less than Dr. Spence and Dr. Rose and still has a more progressive outlook in terms of the point of this article.

Neoliberalism is many things, but the aspect that I will focus on is its ability to create value-based markets and apply those market systems to the world’s social hierarchies. In laymen’s terms…Common sense was replaced by neoliberal thought…it became commonplace to tell people that look like me it’s their behavior’s fault that the system penalizes them. It became commonplace to suggest that more businesses accompanied by financial literacy philosophy in Black communities where more than half the residency makes less than 40k/year (and have a median wealth of $1700) would reverse Black economic turmoil. It functions like propagandized consciousness predicated on the accumulation of capital by any means necessary. And you know what? It doesn’t surprise me that a people whose ancestors were considered capital investment would flaunt any slight bit of capital they may come across today. Black communities have had a pro-capitalist sway without fully being capitalists at relevant measures due to annexation from the US financial realm. Being that Hip Hop, and by extension, Rap music, has aided and abetted neoliberalism’s firm grip on Black consciousness (unconsciousness?), it reaffirms its teleological logics—proving Neoliberalism’s point basically…

But the last time I checked, if my understanding of the intellectual bravado put forth by Critical Race Studies serves me and my memory right, Blacks/Africans are more or less subjugated wherever we preside. So…why do political discussions do so bad with articulating that fact for US Black people, entirely, and, US Black males in particular? The obvious answer is in the first sentence although the nuance gets deeper. Hip Hop, even as an insurgent medium for autonomous creativity, is no outlier to this politically induced dysfunction.

Then, masqueraded in our delusions of self.

Hip Hop as a social vehicle for Black cultural expression has assisted in the explanation of such happenings to Black people. So…no need to delve too deep into it, except to always remember that politics is “professionalized” war. But our only issue is that, Hip Hop’s oral tradition of Rap music could be described as almost anything other than “professional”—its intricate idiosyncrasies dealing with the genre’s capacity to generate respectability politics through dissemination, notwithstanding. Rap can’t seem to escape neoliberalism (not by itself, at least…) because it’s a cultural product of Black people. The suppressive powers that be™ like it that way though and it’s shown by which shows and people they give green lights to. And hell, At this point in the game, you have to expect your raps and Hip Hops to come fully seasoned with neoliberal rhetoric.

We may even admit in 25 years that The Breakfast Club is the foremost Black neoliberal media project in public radio currently, doubling as bootstrap-crazed Niggerbreakers that compares (mostly) Black men and women to steeds weekly.